Whenever I return to Malaysia, I have to remind myself it's... well, Malaysia. According to Jib Gor, it's on track to becoming a developed nation in a few years' time, though there is much to suggest we are only half-baked and mainly it's just facade.

The things which are seemingly normal and expected of in Japan, are actually very-nice-to-have's and accorded in special cases in this country. Some would say, even the rest of the world.

Just a couple of days before I was due to fly back, I was trying to do some last minute Christmas shopping. Antonio happened to tag along after I had passed him some delayed gifts.

It had been a rainy day, and we both had an umbrella each. Reaching the entrance of Sogo, we were greeted with a "gadget" that wraps umbrellas with a plastic sheet so that you don't make a mess of the shops inside. 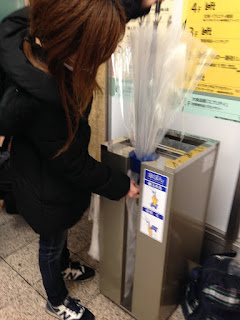 It's found almost everywhere. It helps both the customer who don't have to worry about shaking off the excess water, and keeps stores dry and safe for all. 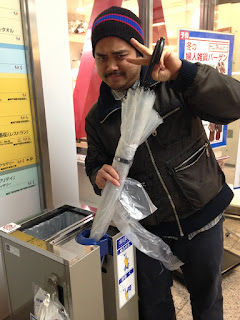 Just push wet umbrella in. and out comes a neatly wrapped umbrella!

As part of extra service, shops also offer additional packaging for the goods that you have just purchased. Japan is well known for elaborate packaging as part of their hospitality and culture. It's normal for each piece of confectionery to be individually packed, then presented in a gorgeous box which is then covered with nice wrapping paper. These are usually put into a matching paper bag which might contain smaller bags if the goods could be presented to various people. 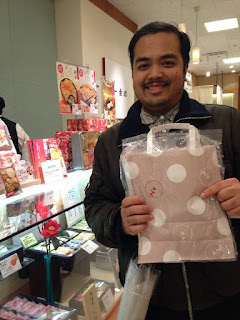 However, on rainy days, they also add a layer of plastic that fits the size of the paper bag just nicely so that your gifts don't get wet. Since most people take public transportation and have to carry everything back by hand, this I must say is really thoughtful of them!

The other thing which I find that really epitomises Japanese hospitality is what I call the "closing shop bow". Maybe this is just in Sogo or other high-end stores, but as I was still lingering around after closing hours trying to find the right gift, they didn't hurry me or shoo me out the door. Instead they allowed me to get what I needed, and as I walked out to the exit, each store attendant would stand by their booth/area and bow down and thank me. 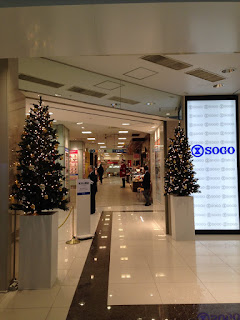 Imagine going down the aisle with a few confectionery stalls on each side with the sales person bowing down as you sheepishly walk toward the exit. Hmm, maybe that's the reason - You would feel so bad for such indulgent hospitality that you would walk faster so they don't have to stay back to do extra bowing!

Sprinkled by §nóflèk at 2:20 am No comments: