Some of you would have seen the "poster" I appeared on FB for the Jom Balik Undi campaign. Long before it appeared, I was in a dilemma whether I could actually fly back. Price of flight being one, and ability to actually go back to Malaysia was another.

I prayed that both would be settled by God, and I'd take it as a sign to go back to vote.

After a few weeks of searching, thinking and strategising, I finally got very reasonable tickets, and managed to work out an arrangement with my boss despite the hectic work schedule.

My flight ticket back was about 1/3 of the usual costs, nevermind it's the airline that I still can't see eye to eye with! I was still working back in Malaysia, but still managed to take some time off to run personal errands and spend time with loved ones. 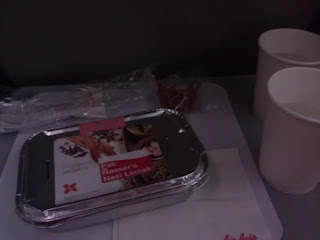 Yes, so this was my first time flying AirAsia X. And that's the food I get for a no-frills airline. No complains there, though of course what you actually get when you open the aluminium lid is really quite different from what's displayed on the menu. I had been craving for nasi lemak, but surely this was not the best way to satisfy my craving~! 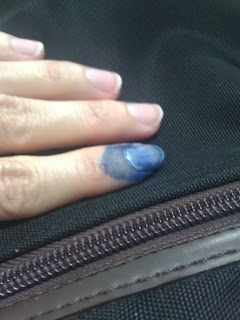 One of the reason my flight was so cheap was a late night flight, which enabled me to arrive on voting day itself. Here you see my badly done manicure job.

With my groggy self from lack of sleep on the plane, and then having to wait 2 hours under the sweltering tropical sun, and with no food nor water to keep me happy, I was relieved I did my duty as a Malaysian citizen.

Lots of events happened on that day, and many days following that, as you can read from the news. I was kinda caught up with it while I was in Malaysia. My brother almost wanted to go for the rally in the Kelana Jaya stadium! 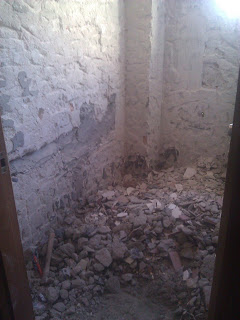 And, this is how my bathroom looked like when I came back to the house! My mum had warned me the house looked like a war zone.

My parents decided to do some renovation work because of some piping problems and to solve a host of other issues in the house. It was really messy, dusty and noisy during the day. Pity my dad who's at home most of the day. Pity my mum who has to clean up the house everyday.

Since I had to help my parents during this period, and having to still work, I didn't to really go out. Good excuse to just bum around I think! But of course, I managed to catch up with the 7D4 babes :)
Sprinkled by §nóflèk at 12:01 am No comments:

tou miau farm next to my balcony

Think the last time I remember eating tou miau was about 4 years ago! Back then I had started to grow my own farm as a way to add some greenery to my little space in Tokyo.

This spring, I thought of having tou miau again. Think I had a phobia after the flies attacked my farm the last time!

So I approached tou miau with a bit of optimistic caution this time. After all, I thought a little variety in vege would be good. After cutting off the sprouts for 2 rounds of stir fry, I placed it in a plastic container and filled it with some water. 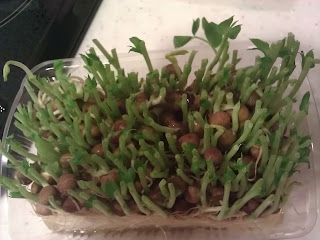 I placed this indoors, but next to the balcony. I checked on it to be sure that no flies came towards it! I even tried to make sure there was as little water as possible in order not to attract any pests of any kind, but enough to let the seed sprout. 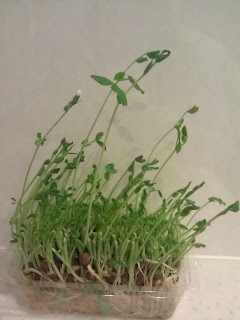 The next day I turned it towards the opposite direction, hoping to rectify the angle. It did look a little better. I also added more water since I was quite happy nothing bad has happened. And the next day I was greeted with a lot more growth! 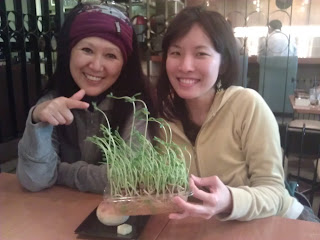 Unfortunately, I had plans to fly back this weekend. So I had to pass it to Erike (the pic above is Ako-san, Erike's friend) to take care of of it while I'm away. I told her that if she would like to harvest it before I'm back, she can have some nice stir fry with garlic. 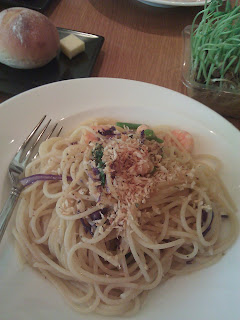 Since we had a bible study today, I brought it along to pass to her. We had a good chat about taking care of plants over lunch. My spaghetti looked so unappetizing that I was so tempted to pluck some of the young pea sprouts to add to my lunch!
Sprinkled by §nóflèk at 1:33 am 2 comments:

I don't usually go looking for videos, but one thing led to another. And I found this amusing video of Kyary Pamyu Pamyu. The song is awfully familiar and so catchy it's still ringing in my head.


I've heard it on some advertisements on TV recently, and never gave much thought to it. Until I found out that Kyary Pamyu Pamyu is only 20 years old, and already a successful fashion blogger, model, and businesswoman. Makes me think that doing rather nonsensical things (can be silly to some but cute to others) can get you somewhere too.

You can search for other music videos under Warner Music Japan, just note that there is quite a bit of Japanese quirkiness in them! :)


Well, I'm glad K-Pop has not totally taken the world by storm, J-Pop is still quite alive.
Sprinkled by §nóflèk at 12:52 am No comments: