I've just sent off what should hopefully be the last email with regards to the project I have rolled off from last week. Even though the official roll off date was last Fri, 16 Dec, it sure didn't feel like it was my last day.

Out of the many things on my to-do list, there were still some outstanding. Not very urgent, but mostly last minute requests. The rest were basically administrative like downloading files from the project SharePoint, writing thank you emails, shredding documents and goodbyes+hugs.

Even though we were supposed to be ramping down during the last few weeks, it seemed like one of the busiest periods ever as we rushed to tie up loose ends. With a client that you've been with for just a little over 2 years, it's difficult to handover everything in less than 2 weeks.

Out of all the projects I've been involved for them, this one has definitely left quite an impression, both professionally and personally. Looking back, those late night crunches, learning everything new on the fly, weekend catch up's and figuring our clients out have been a series of learning experiences.

Sometimes it felt like I was about to give up, having had enough of the lack of work life balance. Sometimes I tell myself to just push through a little bit more, I've come so far. It's the li'l thing which we call being responsible.

Being a sanguine, I'm not naturally prone to finishing what I start. In fact, it takes tonnes of discipline for me to even finish a book! Hence, I have many lying around half-read, all started with good intentions; either to arm myself with better financial planning knowledge, learning how to take delight in our Father, or to deal with difficult people.

I'm quite surprised myself at how much I've pushed myself despite all the challenges and difficulties. At least I can say I've given the best given the odds, and have accomplished what I had set out to do.

I may not be able to see the fruits of my labour, but I'm sure those colleagues who are staying on would be able to update me later. Or at least looking at the notes I've been getting, I should take comfort that my work has received recognition and is being appreciated.

Now, if only I could "work" this hard and be more "active" in the works that are more eternal in substance and value. Now that I know I'm capable of "sacrificing" so much for something I may not necessarily believe in, I should feel ashamed for not giving up even more for Him who gave His only begotten Son. 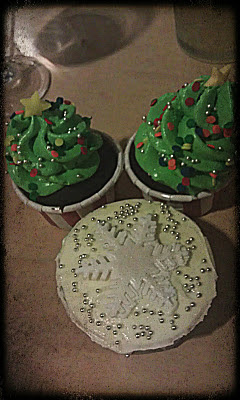 Before I forget and not post up anything before Christmas, here's some themed cupcakes wishing you a Blessed Christmas, Buon Natale, Joyeux Noël, メリークリスマス、สุขสันต์วันคริสมาสต์, Selamat Hari Natal and عيد ميلاد مجيد.
Sprinkled by §nóflèk at 2:30 am 3 comments: