It was decided that we'd make a day trip to Brunei on Saturday and we'd drive there. After all, Miri is just a couple of hours from the oil rich kingdom. Being native East Malaysians, the rest passed through as Brunei was a neighbouring state, but I had to show my passport and the little slip I was given at the airport that said I was from the Peninsular. =.="


The queue at the customs was long from the opposite side, must be the Bruneians out to play. First stop, fill up the gas tank. I just had to take a picture of the petrol station, apparently price of petrol has not gone up in years here!


Although obviously very wealthy, it doesn't show; it seemed like we had stepped into a city smaller than Miri. Vast expanses of land dotted with simple-looking houses greeted us. I was half-expecting streets of gold lined with chandeliers for lamp posts, gilded pavements and manicured lawns.


After breakfast we drove to Jerudong to visit the King's stables >.< 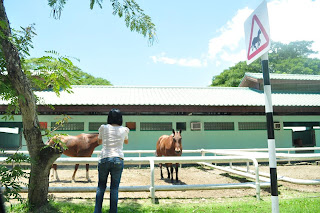 Just a little detour before admiring the very opulent 6-star Empire Hotel & Country Club which is rated as one of the world's most luxurious. 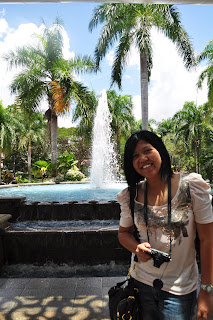 I liked the fact that it was surrounded by lotsa greens in an almost natural setting unlike some hotels which look too pretty to be real. The high ceilings, ample space and a lobby which overlooks the South China Sea made it all very grand.


Tall columns and furniture accented in gold and polished marble floor were balanced with windows which shower the interior with plenty of sunlight. 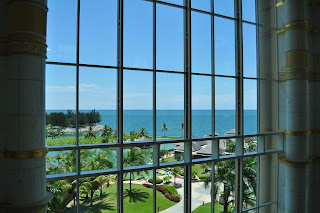 I think that's a refreshing touch because sometimes too much bling can be overly stuffy.


Apparently Bruneians get discounts for rooms here. How nice, on top of already cheap petrol. 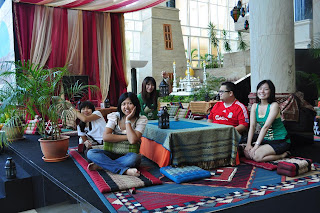 Nevermind the fine touches that went into making this a majestic hotel worthy of its name, I would have been very much contented just lazing at the poolside admiring the sea. But of course if I were to stay here, I'd be out at the beach instead!


Seeing so much gold, I almost forgot that I have yet to visit the 2 tourist attractions mentioned in Lonely Planet.

But first, some lunch - Kolo Mee. Tasted somewhat like our Wan Tan Mee, but served with chicken wings & boiled egg in sauce and tofu soup. This can only be tasted in a quaint little shop in a block of flats, only locals will know! 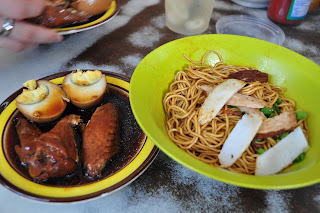 I've heard a lot about Kampung Ayer and thought a village on water would make good photography fodder, until I saw these speedboats at the pier waiting with anticipation. According to our Bruneian friend, they charge cutthroat prices for a ride to the village.


Since they said it wasn't worth it, we decided to walk over to the Omar, Ali & Saifuddien Mosque which is said to be one of the most spectacular in Asia Pacific. Its main dome is covered in pure gold.


Just as we were ready to go back, we made a brief stop at this Billionth Barrel Monument that commemerated, what else, the 1 billionth barrel of crude oil that was pumped from the Seria field in 1991. It was here that led to the successful drilling which made Brunei what it is today. 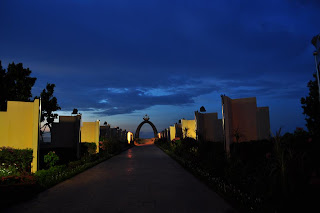 Of course those are not the only things we did in Brunei. As you can see, it's not true there's "nothing in Brunei". It's just that, a day trip is just about nice :)

Sprinkled by §nóflèk at 9:06 pm No comments:

I got the job offer pretty fast after the wrapping interview with the partner. They even wanted me to start in a few weeks' time. Knowing how the fiscal year was about to end, I guess he wanted to include me into the year's headcount.

All the leaves that I had saved for a year-end holiday had to be used. If I was not in the midst of a project with weekly deliverables, I would have used up my 5 days' of leaves and take the whole week off before starting at the new company.


But because I was holding 2 portfolios with no replacement in sight, I had to stagger my leaves over the remaining weeks. I have yet to do any overseas trip this year, and the only country in my ASEAN list still unchecked which was just nice for a weekend trip would be Brunei.


In spite of everyone's "there's nothing to do in Brunei!" responses, I decided, if there really is nothing, then I won't be making a 2nd trip. Besides, this was a new country and I have never stepped foot into Borneo before (a previous transit in KK doesn't count!).


My colleague and I based ourselves in Miri because she used to live there before, and still had friends in town. We reached Friday evening and were whisked into an electric blue Nissan Skyline. That itself gave a sneak preview of how happening Miri can be, especially when night falls!


Though seemingly small and boring, it is home to timber tycoons, expats working in the oil & gas industry and those involved in palm plantations.


I was really surprised to see huge mansions, revving sports cars and people partying away at the few night clubs in the city. Apparently their hottest night spot was even better than KL's Zouk. So much so Bruneians hop over to party.


Sarawak's 2nd largest city is also where the first oil well was drilled. Thanks to this black gold, Miri has grown to be a business, commercial, and educational centre which attracts foreigners of all skin colour.


I met an Australian who's lived here for more than a decade working with an oil giant; and was pleasantly surprised to find that he enjoyed the idyllic lifestyle that Miri had to offer. Maybe the perks offset the mundaneness of the offshore job. My colleague's friend comes back for a few weeks after working on the rig for months, and parties almost every night with his buddies.


For me, I was more interested in the natural beauty that Borneo had to offer. We had only a brief evening to take a short walk along the beach, and I wished we had spent more time there instead.


But of course, since I was being hosted I couldn't make such demands so I guess I will have to keep the beaches for another trip! 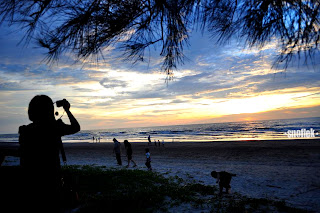 I'm kinda proud of the fact that the centre we set up for our client is now growing as a result of the plans and processes that we have put in place. The original plan was to have us roll off in March, but they kept extending our contract.

We have had dozens of new people join the centre so far, and to see the place transform from almost nothing except our core team of 6 to one that spans the whole floor is what I akin to giving birth. I have been involved in almost every piece of the process that brings people in and to help them in their transition in the new place.

I know every person by name, which division they belong to, which line manager they report to, and almost even memorised their birthdays personal details because I had to double triple check their on-boarding forms.


Almost as soon as they start in their new positions, they have to fly off overseas for work. With that came lotsa goodies from all over the world. We've had Macadamia nuts from Melbourne, mini bars of Mars and Snickers from America, and various confectionery and sweets from Europe.

Sometimes I do envy these people. They get to travel business class, get allowance to spend on shopping, and bring back toiletry sets from airplanes and hotels. Plus extra stamps on their passport.


But they tell me it's no fun travelling for work. I've never travelled on company expense, and can only imagine how it must be to stress out for a meeting with people you've never met before, adjusting to time differences while still having to deliver, and having little time for leisure.

So I'll just savour the candies they bring back!
Sprinkled by §nóflèk at 11:25 pm No comments:

After a weekend of partying in Borneo, a delayed late night flight and less than 3 hours of sleep, I had to be at the new place for a week of intensive training.

On a positive note, it's refreshing to be working with the creme of the crop and have the full support of professionals who are as eager to give their best and are as enthusiastic in learning too.

But of course, this is only my first week, I have yet to see what lies ahead. My former colleagues have warned me not to cross over to the dark side.

Now if you'll excuse me, I have a bunch of tools to download and a podcast to listen to in preparation for tomorrow's session.  @.@
Sprinkled by §nóflèk at 11:16 pm 2 comments: