One of the little delights I missed about Japan was trying out the foods there. It's always a pleasure to find something new in the supermarket when I do my groceries. 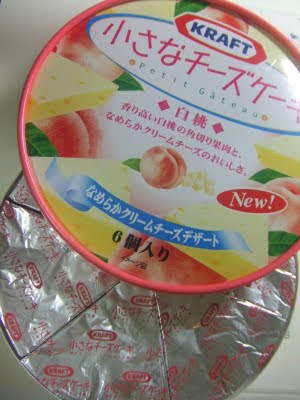 Like trying out this Kraft cheese triangles with bits of white peach in 'em. I try to get these stuff into the fridge so I have something to treat myself from time to time. 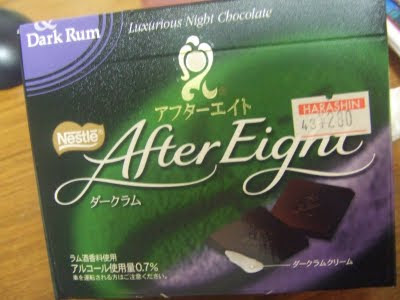 Was surprised to find After Eight's, came in dark rum cream insides. 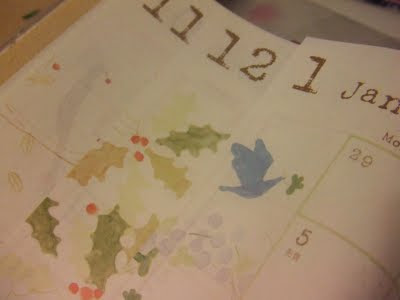 I started using schedulers in Japan, just can't resist because they're so cute! 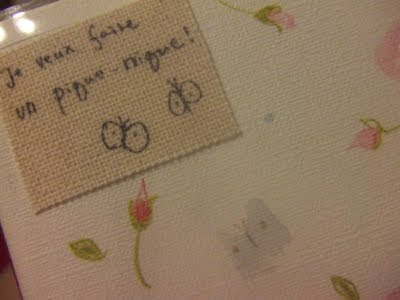 Even though I may not understand French, but it's the cuteness that counts. You will find a lot of these stuff in Japan in foreign language that a lot of times don't make sense. I know this because I had a French colleague. 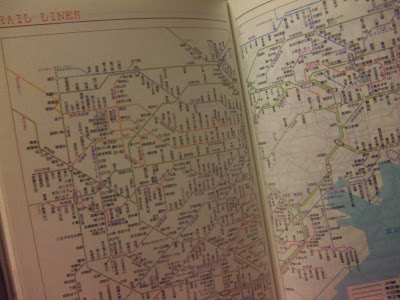 But this is where schedulers come in handy - they provide pages of very useful train and subway networks. And this is just for Tokyo. 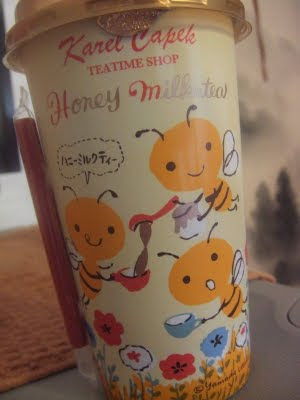 With something this cute for a cup of Honey Milk tea, it's hard not to resist. Also, I saved this for a treat during the winter days. 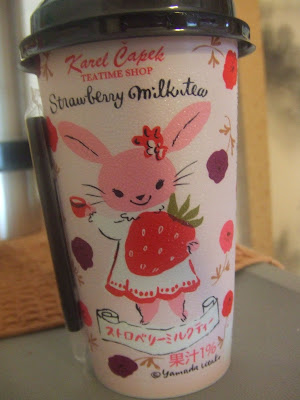 When I saw another version many months after that, the Strawberry Milk tea ended up in my fridge for a summer treat.

Some may think I have not gotten over Japan yet, but with so many other interesting pictures in my archives still not shared, and it being one very memorable phase in my life, I find it difficult to not reminisce once in awhile.

Looking back, I can't help but be thankful for that period, with all its ups and downs. I may not fully comprehend why they all happened, but I'd like to think that those events provided some important life lessons.

Was trying to explain tatami to Miss Barbie when I ended up digging out pictures from my Japan days. Was feeling a bit nostalgic looking through them, and realised I never really posted some of them here.

Most were taken randomly because I thought they were so Japanese! Agree with her that I'm blessed to have had the opportunity to live in Japan where the culture is rich and so many things can be made cute and/or pretty. 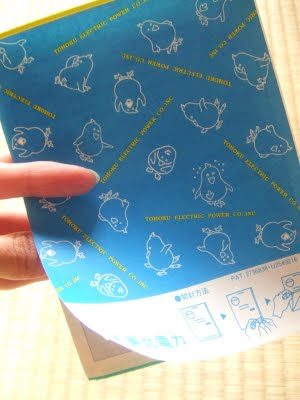 Electricity bill comes printed with chick-like silhouettes. Maybe to cushion the amount you'd have to pay to the Tohoku Electric Power Co. Inc. 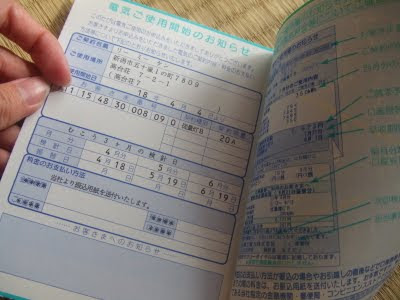 But then, since it was my first notice, the statement was more to tell me when they will be coming over to check my usage. 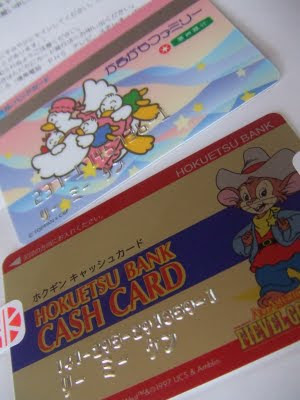 Bank account cards, and these are not for kids. Ended up having a few accounts because they have local banks which may not have branches in other cities/prefectures. Since I moved a few times in Japan, ended up with at least 3 separate accounts. 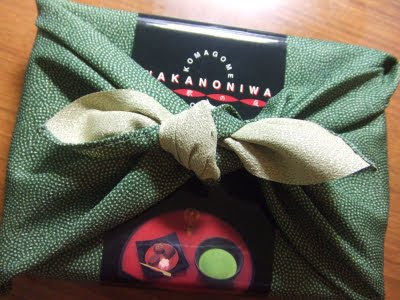 First time receiving a gift wrapped in 風呂敷*, hence took me some time before I finally had to open it because I didn't want to spoil the wrapping. 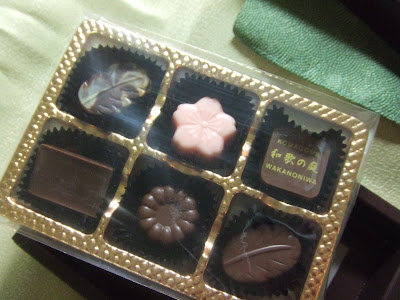 Petite sweets to be savoured with green tea. 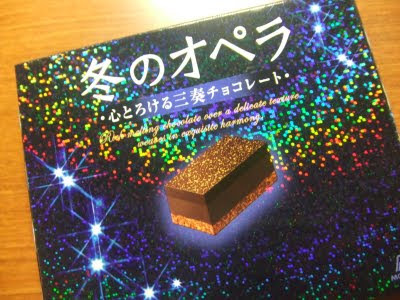 Received this when I loaned my car to a classmate. With most confectionery, they get seasonal, and this was the Winter Opera. 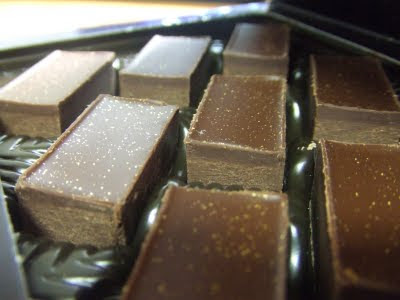 Sprinkled with gold flakes, almost couldn't bear to sink my teeth in 'em!

I have yet to hear from American Airlines (AA) about my compensation. Due to long hectic hours spent at work, I had less time and energy to chase after an incompetent airline which caused me stress and anguish while I was in the US.

Living almost like a refugee is no fun. Not when I had to attend a company training on a location out of the city with no direct and easy access to a shopping mall.

You can imagine the frustration I had to go through upon landing and not having my luggage with me. What was to be a trip to explore a new continent turned to me wanting to take the next available flight back home.

Not only did I not have my luggage for almost the whole duration I was there, but due to situation at work I had to stay up late to catch up. I thought to myself, maybe it was a sign that I should not have made the trip in the first place.

Still, I reminded myself that it was still an opportunity that many would consider a luxury, especially in this times of economic turmoil. Finally, for the first time I was flying on company expense, nevermind that I was cramped up for no less than 24 hours of cramped economy seats with 2 transits.

I counted my blessings too for being able to make US my 2nd new country this year, and for having a cousin that I could turn to for temp clothes and shoes, nevermind that she was vegetarian and I lost all the weight I had gained while feasting on bacon and glorious American food during my training days.

Being in US gave me a peek into the once-mighty country of US, which the world looks up to to solve their problems. It was a good break, albeit not as how I would have imagined.

My cousin and her Indian husband encouraged me to try to find work in US, sharing their experiences about better work life balance and opportunities in the IT sector. As I listened to their stories and thought about the krazy hours I was working, it did sound very tempting.

But the lost luggage had marred my experience. I told everyone I'd be too traumatised to fly to US again, not counting the stricter immigration rules and inspections.

I was about to give up about hearing back from AA. That was until I received news from my company that our travel insurance (and not AA!) would be able to cover some of the loss.

A few weeks ago they emailed to say that delayed luggage more than 4 days is considered as loss luggage. Therefore I would be entitled to the maximum compensation of RM750. I received this email while I was drowning in work, and being a bit jaded by then, did not even feel a tinge of happiness.

So when I checked my account this morning and saw the cheque cleared for that amount, I could only manage a smile.

Yes, even though it's a little something to be thankful for, it's better than nothing. That, and maybe I'm just too tired to feel anything anymore.

jinx not my hope

a little hope coming my way. but i dare not rejoice until i see it with my own eyes. thus, i shall not jinx it by revealing anything at this point of time.

It's been a string of negative feedback and criticisms for the past few months. As far as Butterfly could remember, she has not heard anything positive in a long time.

Whenever Butterfly sends out emails or documents to be reviewed, she braces herself for rework and having to answer some questions which sometimes make her feel she's not putting in enough effort or thought into her work.

Butterfly remembers last year as the total opposite. Having the Cream Supervisor to guide her and having to report to the Cream Client were just bliss. Butterfly had her share of learning curves, but they were mostly pleasant.

If anything, "excellent", "brilliant", and "wonderful" which became a staple vocab in exchange for work done, started to make Butterfly feel as if she was capable of a lot of things. Those motivated Butterfly to stay on.

This year everything seemed to have turned upside down for Butterfly. In a different project, Butterfly now had the Lemon Supervisor and the Lemon Client. Knowing the true colours of Lemon Client, even phrases like "very good" have started to lose its real meaning.

Seemed like Cream and Lemon represented different styles of working. Cream being cream, they were soft, fluffy and left an overall smooth aftertaste. Lemon always felt sour and made everyone cringe. Not everyone appreciated Lemon though Lemon being lemon had its usefulness.

Learning curves were now steeper, expectations higher and scope of work wider.
Not to mention power play on a theatre full of fantastic Actors and Actresses all eligible for the Oscars.

Butterfly just feels tired. Exhausted even. More and more around her wants to be on the stage. She gets caught in between, accused even of standing in their way when all she wants is to fly outdoors in the garden and smell the roses.

Away from the crowded stage, where the madness is, where masks have become a necessary accessory. But first Butterfly needs to figure her way out of that madness.


*Any resemblance to real-life characters is purely coincidental. Excerpts from this story may be reproduced by acknowledging the writer.

bird on the gate

It's interesting how God speaks when you least expect Him to. Especially after I've ranted about how He has been silent in the midst of my struggles.

To make sure I know He's listening and responding, yesterday's ODB reading was about doing good regardless. I was actually rushing to leave for work when a tiny prompt reminded me I have yet to do my Bible reading.

I couldn't help but be amused when the verses Luke 6:27-36 came to view on my Bible.

While I was getting into the car, the sight of the neighbourhood bird perched on the gate caught my attention. It was the first time I had noticed that, I took it as a little cheer-me-up from God to remind me that if He is able to feed the birds of the air, whatmore will He do to take care of my very needs.
Sprinkled by §nóflèk at 8:22 pm 4 comments:

For a long while, it has been nothing but tears to accompany me to sleep, wishes of a better tomorrow and prayers for strength to survive another day.

I can't say that has subsided, nor has any of the issues fully resolved. Neither do I know why I'm going through all these.

The bitter lump is still in the throat. In fact, the waves continue to crash over me, fiery arrows fly from all directions without any sign of abating.

If anything, I'm challenged to trust and hope in a God that seems silent for most part of this struggle. There doesn't seem to be any (visible) light at the end of the tunnel, and I grab at whatever I can to support me.

For now, your prayers and encouragement have been my lifeline. At least I know I'm not alone in this.
Sprinkled by §nóflèk at 1:03 am 3 comments: