It feels like a part of me has died.

We are as similar as we are dissimilar.

It pains me that I can't be with the one I love.

Not so g5ood news : Accidentally spilled water onto keyboard. Now my g5 and h6 are beh6aving5 funny. (T.T)
Sprinkled by §nóflèk at 12:22 pm 3 comments:

how can i not love you

when i first read in our mail that we would get a ride from the airport in a limo, i thought it must be the kind of limo that we have in klia - just a glorified version of the normal cab.

you can imagine my skepticism because i made the call just after i filed a claims for my luggage. feeling really down all i wanted was to get some rest after the 20+ hour journey, and try to look for the luggage later. so the lady on the other line did mention a white stretch limo would be there just outside the luggage claim area. 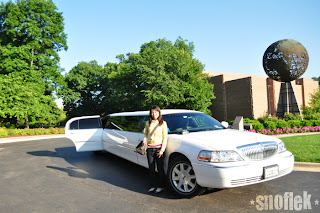 i only believed it myself when i stepped out 10 minutes after that call was made to find a chauffeur coming out to greet me. it was a lady chauffeur, looking all professional with a uniform, cap and gloves. she was ready to take my luggage to the boot, but was surprised when i mentioned i didn't have any other than my hand carry.

i had the whole limo to myself - had to almost pinch myself to believe it. 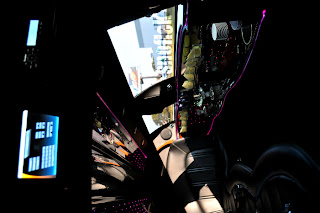 kinda felt like a superstar for awhile! i thought they would've received this for large groups to make it worthwhile. oh well, since it was arranged for me, i might as well enjoy it while i can.

not cheap though, this cost me almost USD70 for one-way trip. would have been great if i had the mood to turn on the tv or blast the radio, or even have some bubblies waiting for me. was a good thing i had the sense to buy some hot chocolate from starbucks, so that sustained me a bit until i reached the training centre. 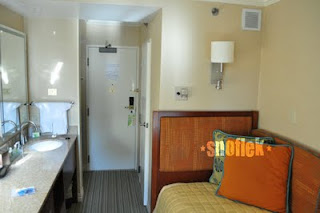 our small but functional rooms. just nice for a single occupant with almost everything you need. set my expectation low, so was pretty happy they even had toiletries and towels! oh well, better than nothing, so i'm quite thankful.

since i never had the chance to do non-work stuff, i decided to skip the drinks that everyone else was going for and spent some me-time.

feeling a bit better and having gotten a refreshing nap, here are some stories i've been wanting to tell since i landed. 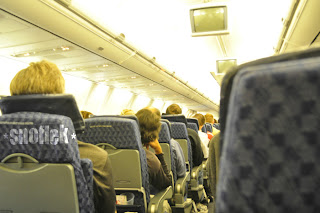 first, a shot i took in the SFO-ORD flight. first time i'm surrounded by big americans. it's very different for me because even when i was in australia, it didn't feel like i had left asia!

after the luggage incident, and being cramped in an old plane, i appreciate asian airlines even more. also, asian air stewardess who work very hard, or at least they make the effort, to serve their customers.

while i understand the equality policy that does not discriminate against certain age group and gender, i honestly think american stewardesses have it much easier than their asian counterparts.

on my almost 4 hour flight, all i got was a cup of orange juice. and i had to ask for it myself.

the stewardess just walked out from the back with a tray of juices, but never said a word. whoever wanted one had to put up their hand and ask for it. nothing like "ma'am, what would you like to have?" or even if options were not part of the flight ticket, something as basic as "orange juice, anyone?" would suffice.

after that one brief round of her silently walking down the aisle too cramped for the average american, she just went to the back of the plane and read newspapers.

those who know i have to eat every 4 hours will know that i was feeling quite uncomfortable, especially after 2 transits on a long journey across the pacific ocean. even if they wanted me to pay for some cookies, i would have gladly done so, but there was no such thing.

i'm not sure if their international flights are any better, but this plane was old, had monitors on the ceiling of the aisle, and for someone as petite as me, really cramped seats. i don't know how the americans travel like this if they're double my size!

what a nightmare - and a terrible way to end the journey to what could have been an adventure that i would have been proud to share.
Sprinkled by §nóflèk at 3:11 pm 5 comments: