I first heard about Amsterdam from my parents who went there for their "2nd honeymoon"! My brother and I were still very young then, when my dad was assigned there for a short-term training. My mum visited him for awhile and left me with our maternal grandparents, and my brother with our paternal grandparents. 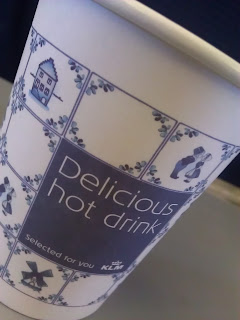 So I was naturally quite curious about this country, which I have never expected to visit. After the Euro backpack tour, I did think perhaps I'd like to visit the other neighbouring countries if I ever go to Europe again. Never in my mind did Holland cross my mind though. I've seen enough Dutch Lady milk cans, and seen enough photos of windmills and clogs to think I know it all!

But it's when there are no expectations, that surprises abound.  I've heard about the (non) hospitality of non-Asian airlines and was expecting KLM to be something like American Airlines (if you remember my experience from before!) So I was naturally delighted they had pretty decent service on the plane. 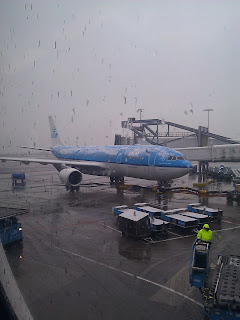 Later I found out from my French colleague that the flight attendants on the Japan route are specially trained. Not bad, I was surprised myself how good the service was. They might not look as dolled up and young as their Asian counterparts, but the unexpected European hospitality made up for it. Still better than the American stewardesses who did nothing but walk up and down the aisle with a tray of orange juice and offered no one anything. 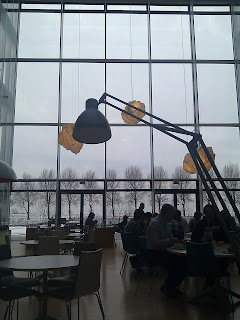 It was snowing lightly when I arrived. I was a little anxious because I had just recovered from influenza. I didn't even have time to shop for extra warm clothes. I thought, worse comes to worse, I'll just add on more layers or recycle my clothes.

Perhaps the sight of snow took my mind off the state of my health. It was quite beautiful seeing the snow fall. I was a little disappointed it wasn't snowing in Kobe, and was about to plan a trip to the north just to experience some. 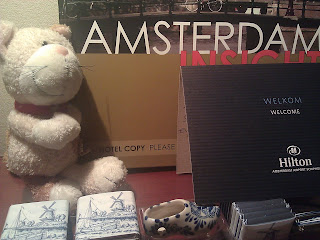 My first time staying at the Hilton! Only because my boss had booked himself into this hotel, just next to the Schiphol Airport. Apparently the corporate hotels are located in the middle of nowhere, so I was glad the airport had decent restaurants, shops and even a supermarket. Food is a necessity especially in winter!

Ms Barbie had to warn me that even if it's a hotel such as Hilton, I should not expect Asian hospitality. Well, first impressions do count I suppose. No smile at the frontdesk as I checked in. A Welcome card addressed to "Mr Lee". Bath tub clogged up. 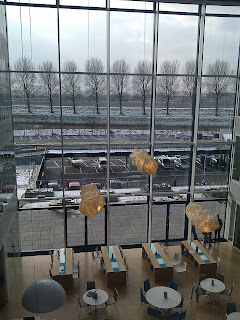 I was totally blown away by our European HQ at Hoopddorf. A fully glassed building that lets in plenty of sunlight. Apparently most buildings are like this since they don't get much sun in this part of the world. And yet, it's well heated that people walk around in T's when it's warmest in the afternoon.

Which only made me envy them, and dislike our office in Kobe :( Oh well, grass is always greener on the other side. Modern building with sleek interior, yummy food selection at the cafeteria, and unlimited servings of tea coffee and chocolate drink. To think that Europe has economic issues? 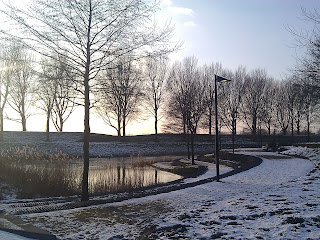 I was so excited to go outside the office one day, earlier than usual because the workshops ended before the sun set. Netherlands is really a flat country. I was glad I managed to capture this, because it melted the next day. So excited that I didn't watch my step as I turned to head to the station and fell down on a sheet of ice! I have a bruised knee as a momento of my trip.
Sprinkled by §nóflèk at 11:00 pm 2 comments: 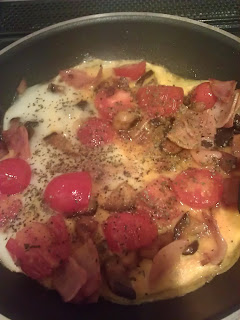 I call this my version of quiche. I'd like to share the recipe coz it's really simple, and anyone can make this. You just need What I used :
1 clove garlic
3 slices ham/bacon
1-2 shiitake mushrooms
4 large cherry tomatoes
1 egg
1 tbsp butter
salt & pepper to taste
herbs for added flavour

1. Heat up the pan with butter, making sure not to burn it. Throw in the chopped garlic and lightly fry until fragrant.
2. Remove stems from mushrooms, dice them and fry together with garlic.
3. Cut ham/bacon into smaller strips, add to frying pan. The kitchen will really smell so nice by this point all because of the butter. Which creates great appetite for someone who's been on porridge for days!
4. Dice tomatoes (better if they are very ripe so the flavour comes out best) and add to frying pan. Stir all once in awhile to ensure surfaces are evenly cooked.
5. Beat the egg in a bowl, together with salt and pepper, then slowly pour mixture into the pan, making sure all ingredients are covered with egg.
6. When it's almost done, sprinkle some herbs (basil would be good), and a little black pepper for added oomph, on top.

This is probably not an actual quiche, and looks a bit like egg pizza. But it goes well with porridge, rice, bread and even on its own as a snack.

You would have noticed I don't prepare all my ingredients before cooking, but more of cutting and dicing while cooking. This will not work if you're using a wok on a fire stove! You can vary the ingredients and amount to suit your appetite.


Afterthought : I think I must've learnt this from my Egyptian friend, who used bellpepper in the mixture. Served with flat bread similar to naan is good too.
Sprinkled by §nóflèk at 1:24 am No comments:

I didn't imagine such a day would come where I would get sick of porridge! I've been having porridge everyday for lunch and dinner for almost the whole week now. It gets a little tiresome especially if there's not much variety in the condiments considering I needed something quick and easy.

For those who know me, I'd gag if I don't have some variety in my food within the same day, much less for 5 days in a row!

Well, maybe I was just sick of my own porridge, coz  I was well enough to cook and still had some stock in the fridge. On Wednesday, my kind colleague dropped by with some groceries (she's the only mother in the team - and yes, this is quite rare in Japanese companies!), I was surprised she bought me some instant pack of porridge. 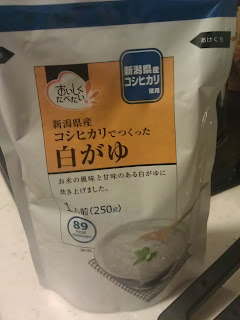 This apparently has the famous コシヒカリ* rice genre from Niigata prefecture. How can I forget this rice which I've been eating everyday when I was studying back then!

I figured, why would people buy instant porridge. Porridge is not that difficult to make, compared to most other food. Well, same reason why people would buy instant rice, instant noodles, instant whatever-food! Quick and easy. Boil it as it is, either in a pot of water or through a microwave. After a few minutes, just pour out and you're ready to eat. 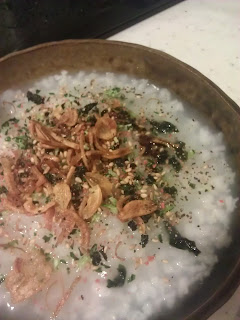 I added some 振りかけ* which has bits of dried fish, seaweed and sesame seeds, then fried shallots and some sprinkling of soy sauce. So simple but can be quite yummy especially when you're craving for supper but you're too lazy to cook in the middle of the night.

I kinda like this type of porridge, where there's excessive "water" and the rice itself is soft. Somehow when I cook porridge in the rice cooker, the rice becomes "fat" because all the water has gone in to plump them up. 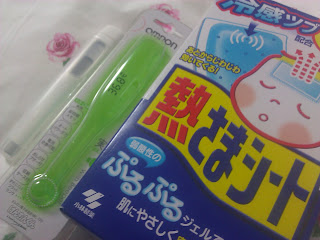 She also bought me some cooling pads in case I still had fever, and even a digital thermometer! I was so amused at this, as I don't even have one back home in Malaysia. When I mentioned this to them, my colleagues were really surprised.

Sure, we had one of those old-school mercury types, but it was mainly as kids. As adults, we'd just slap our hand on the forehead and have a rough idea if we have fever or not. If we're shivering and in pain, it's just confirmation of the same. If you still don't feel well, just pop in a Panadol and you would be good to go.

So, I think the whole influenza test and taking Tamiflu wasn't really that necessary. Now I have hundreds of emails to go through (which I tried to go through in between naps and porridge) when I get back to the office ! *frowns*